2) What is skew, what are problems associated with it and how to minimize it?

4) What is glitch? What causes it (explain with waveform)? How to overcome it?

5) Given only two xor gates one must function as buffer and another as inverter?

6) What is difference between latch and flipflop?

The main difference between latch and FF is that latches are level sensitive while FF are edge sensitive. They both require the use of clock signal and are used in sequential logic. For a latch, the output tracks the input when the clock signal is high, so as long as the clock is logic 1, the output can change if the input also changes. FF on the other hand, will store the input only when there is a rising/falling edge of the clock. 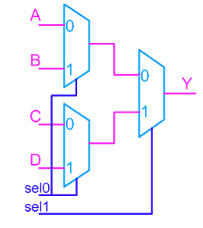 8.Difference between heap and stack?

The Stack is more or less responsible for keeping track of what’s executing in our code (or what’s been “called”). The Heap is more or less responsible for keeping track of our objects (our data, well… most of it – we’ll get to that later.).
Think of the Stack as a series of boxes stacked one on top of the next. We keep track of what’s going on in our application by stacking another box on top every time we call a method (called a Frame). We can only use what’s in the top box on the stack. When we’re done with the top box (the method is done executing) we throw it away and proceed to use the stuff in the previous box on the top of the stack. The Heap is similar except that its purpose is to hold information (not keep track of execution most of the time) so anything in our Heap can be accessed at any time. With the Heap, there are no constraints as to what can be accessed like in the stack. The Heap is like the heap of clean laundry on our bed that we have not taken the time to put away yet – we can grab what we need quickly. The Stack is like the stack of shoe boxes in the closet where we have to take off the top one to get to the one underneath it.

A) Mealy and Moore models are the basic models of state machines. A state machine which uses only Entry Actions, so that its output depends on the state, is called a Moore model. A state machine which uses only Input Actions, so that the output depends on the state and also on inputs, is called a Mealy model. The models selected will influence a design but there are no general indications as to which model is better. Choice of a model depends on the application, execution means (for instance, hardware systems are usually best realized as Moore models) and personal preferences of a designer or programmer

Adv and Disadv
In Mealy as the output variable is a function both input and state, changes of state of the state variables will be delayed with respect to changes of signal level in the input variables, there are possibilities of glitches appearing in the output variables. Moore overcomes glitches as output dependent on only states and not the input signal level.
All of the concepts can be applied to Moore-model state machines because any Moore state machine can be implemented as a Mealy state machine, although the converse is not true.
Moore machine: the outputs are properties of states themselves… which means that you get the output after the machine reaches a particular state, or to get some output your machine has to be taken to a state which provides you the output.The outputs are held until you go to some other state Mealy machine:
Mealy machines give you outputs instantly, that is immediately upon receiving input, but the output is not held after that clock cycle.

10) Difference between onehot and binary encoding?

Common classifications used to describe the state encoding of an FSM are Binary (or highly encoded) and One hot.
A binary-encoded FSM design only requires as many flip-flops as are needed to uniquely encode the number of states in the state machine. The actual number of flip-flops required is equal to the ceiling of the log-base-2 of the number of states in the FSM.
A onehot FSM design requires a flip-flop for each state in the design and only one flip-flop (the flip-flop representing the current or “hot” state) is set at a time in a one hot FSM design. For a state machine with 9- 16 states, a binary FSM only requires 4 flip-flops while a onehot FSM requires a flip-flop for each state in the design
FPGA vendors frequently recommend using a onehot state encoding style because flip-flops are plentiful in an FPGA and the combinational logic required to implement a onehot FSM design is typically smaller than most binary encoding styles. Since FPGA performance is typically related to the combinational logic size of the FPGA design, onehot FSMs typically run faster than a binary encoded FSM with larger combinational logic blocks

Never tell using inverter
a) dcm’s an inbuilt resource in most of fpga can be configured to get 180 degree phase shift.
b) Bufgds that is differential signaling buffers which are also inbuilt resource of most of FPGA can be used.

12) What is significance of ras and cas in SDRAM?

13) Tell some of applications of buffer?

14) Implement an AND gate using mux?

15) What will happen if contents of register are shifter left, right?

16)Given the following FIFO and rules, how deep does the FIFO need to be to prevent underflow or overflow?